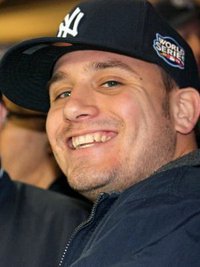 Today I have something totally special for you. In honor of his upcoming release, Buffalo Soldiers, the sequel to the very well received mafia story, For Nothing, I wanted to chat with Nicholas about his book, his writing, and give us all a chance to get to know him!

You’ve had some very unique experiences in your life. Can you tell us a little bit about yourself, and how your life was growing up?
Well for me it was a normal childhood in that it was the only one I knew.  Other people are the ones who generally point things out and say, “You know, that might not be a normal thing to have happen.”  I grew up with a single mother who was diagnosed with schizophrenia.  It’s a chemical imbalance that effects perception of reality, such as hearing voices, and “seeing things.”  It is a surreal feeling having someone point things out to you that, to your mind, don’t exist.  But it does give you a unique appreciation for perspective and perception as it relates to a person’s reality.  I think that has helped me in character development in my writing because I am able to explore differing perceptions with a degree of comfort.
You’re love of art is widespread: painting, film, writing, etc. What inspired you to not just to write, but to write this story specifically?
I had a story.  I once read that if there was a story that you wished existed, you had a duty to write that story.  In this case I have always watched mafia movies or read mafia novels and wished that for different elements.  For a mainstream example, in Gladiator, I watched that movie and thought how cool of a story it would have been if Russell Crowe’s character had actually reunited with his army and brought civil war on the Roman Empire. I have had similar thoughts about mafia stories so I just made my own!
Is there a specific character from your novel that resembles you the most? And are any of the other characters in your book based on people in your life?
Every character I write has shades of me but just bits here and there.  They also have bits of people I have met in real life.  In some cases they share last names or first names etc.  It is my little way of showing people that they are important to me and a way of thanking them for the inspiration.
With the sequel to For Nothing coming out this year, do you feel any pressure, given the overwhelmingly positive response you’ve received on your debut?
I do feel a little bit of pressure.  But usually I take that pressure and throw it out the window.  The thing is I can only tell the story I am meant to tell.  If people like it, then that makes me happy.  If they don’t I have to learn what I can from any constructive criticism it generates, and then move on. I do hope this one has the same tone and feel of the first one.  I worked hard to stay true to what people enjoyed in the first one without straying into the realm of generating my own caricature.  I believe I succeeded.
After the sequel, Buffalo Soldiers is released, what’s in store for you? Do you have another story idea already in the works, or more for this series?
There is a third and final chapter to this series and then I have a medieval trilogy and love story in the works.  As you know, a writer’s work is never done!
You’re a big music lover. If For Nothing had a soundtrack, what would be on it?
A few artists I listened too while writing it include:
DropKick Murphies
Metallica
Frank Sinatra
Cream
The Kinks
Otis Redding
The Rolling Stones
Personally, I absolutely LOVE DropKick Murphies and Otis Redding.
Quickies
Favorite song and why? Yikes, I can’t pick just one. Maybe, Free Fallin’ by Tom Petty
Favorite food? Pizza or Filet Mignon
Favorite Sport? Football, Go Bills!
Favorite Movie? Goodfellas
Favorite place you’ve travelled to? Might be London, tell ya next week !
Writing with music or without?  With
Plotter or Panster? Half and Half
Favorite author? G.R.R. Martin and Dennis Lehane
Special thank you to Nicholas for joining me on the blog today! Good luck on your upcoming release, Buffalo Soldiers. For those of you that don’t know about For Nothing, check it out!

Good Reads Summary
Undercover cop Alex Vaughn goes deeper than ever into the organized crime family of Buffalo, NY. Motivated by justice and revenge, he seeks out the assassin that laid his friend Jack low.
Professional killer Rafael Rontego traverses the deadly politics of Buffalo’s mafia underbelly. In a city whose winter can be just as deadly as those wielding power, Rontego tries to stay ahead of the game.
Their two worlds collide in this epic thriller that takes the reader on a search for self, justice, and truth.
BUY FOR NOTHING
Amazon US (Kindle)
Amazon UK (Kindle)
Amazon US (Paperback)
FIND NICHOLAS