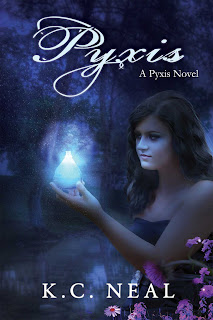 Pyxis: The Discovery
Corinne lives an average teenage life working at her dad’s cafe, hanging out with her best friend, and trying to forget a falling-out with her almost-boyfriend Mason. Things take a strange turn when she uses her late grandmother’s food dyes for a bake sale, and her customers suddenly find her irresistibly alluring. Then she discovers she and Mason are haunted by the same dreams of a dark force that consumes everything in its path. Pursued by shadowy figures and a crazy woman with secrets from the past, Corinne must find out who her grandmother really was. In her quest to unravel her family’s history, she learns she is destined to protect this world–and the dark world of her dreams. She races to find the answers she seeks before her nightmares break free.
My Thoughts
FRESH AND UNIQUE. Those are the first words that come to mind after reading this story. PYXIS is new. It’s not a remake of another Young Adult novel, with a single unique twist to help it stand apart. The entire novel is a breath of fresh air and it doesn’t need help from other stories I’ve read. It stands completely on its own. That’s major accomplishment in a YA flooded market and because of that, once I started, I didn’t stop until it was finished.
Neal has built not only a beautiful and unique storyline, but characters that are completely lovable. You can relate to them, their believable, and most importantly, they’re real. Corrine isn’t perfect, she has quirks. She doesn’t always react to things like you’d expect a typical heroine of a YA novel to do, but she reacts in a very real way. She gets scared, nervous, and she’s strong enough to persevere. My favorite thing about Corrine was I felt like I knew her. Not because you get an info dump of back story, you don’t, but because of how very natural she is. That’s one of the most incredible things about this story and Neal’s writing; it feels natural. There wasn’t a single moment where I felt like the story was forced. Not once did I feel like something happened in the story, just to bring up more questions, or solve problems out of convenience. This book had a very natural flow, and a story arc I felt was delivered, from beginning to end, flawlessly.
The entire cast of supporting characters holds unique traits and flaws; each character has a voice of their own. No two characters sound alike, and you either love them, or love to hate them. There is no in between. One of the best parts about this book, that so many other book struggle with, is relationships are real. There is no over the top love at first sight relationships. Just like the characters and the story, everything in this book feels real. Things happen naturally and Neal delivers it all with class. Hints of the other world leave your imagination churning, wondering what could really be on the other side, and what Corrine’s nightmares are all about. Are they a warning? A vision? A taste of what’s to come? We’ll have to wait on book 2, Alight: The Peril, for those answers.
Pyxis was a quick read. It’s so well written the pages flow seamlessly from one to the other, and it’s over before you know it. Not without leaving you longing for more of course. To say I’m looking forward to Alight is an understatement. If you’re looking for a YA read that’s unique, refreshing, well written with very real characters, a beautifully paced story arc, and some actual laugh out loud moments, Pyxis is exactly what you’re looking for.
If you’re not convinced, check out the reviews on any of the links below. You’ll see I’m not the only one who thinks so. Pyxis has been receiving rave reviews since it’s release, and after reading it, I can say they’re all well deserved.
Buy Pyxis:
Amazon (eBook)
Amazon (Paperback)
Amazon (Audio Book)
Barnes & Noble (Paperback)
Connect with K.C. Neal